Today, quite a few members of our family went on a train ride.  The train is a historic steam engine.  It was decorated up for the Christmas season, and lucky ticket holders could ride it for about 45 minutes.  The ride went along the Willamette River from Oaks Amusement Park in Portland, Oregon, to the Ross Island Bridge and back.

Along the journey, many views of the Wilamette River, a wetland area with many birds in it, and the city of Portland were enjoyed.

It was a typical cloudy, sometimes rainy, November day in Oregon.  However, it was quite warm for this time of year, so no one was cold or miserable.  The train itself was heated and enclosed, and there was a waiting area where everyone could be out of the elements. 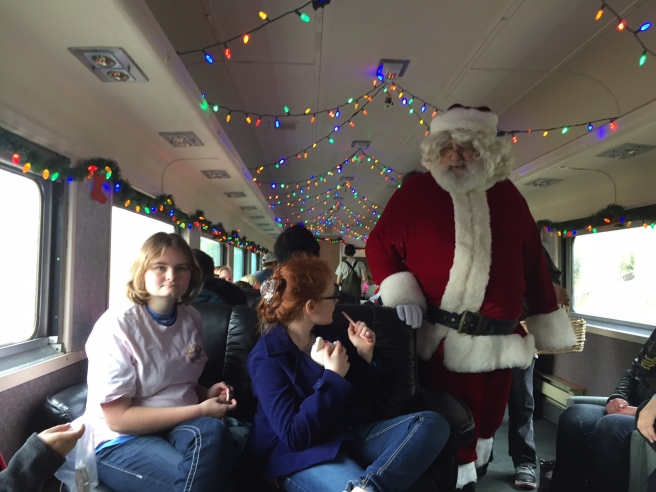 The train was decorated for Christmas, and the kids enjoyed a visit and a candy cane from Santa.  After the ride, we took the kids skating and then all went out for dinner.  This was the first time any of us had taken this train ride, and we all agreed that it was a great start to our Christmas season.  It was a nice continuation of the fun our family enjoyed yesterday at Thanksgiving and gave us all a chance to visit even more. It was a great day! 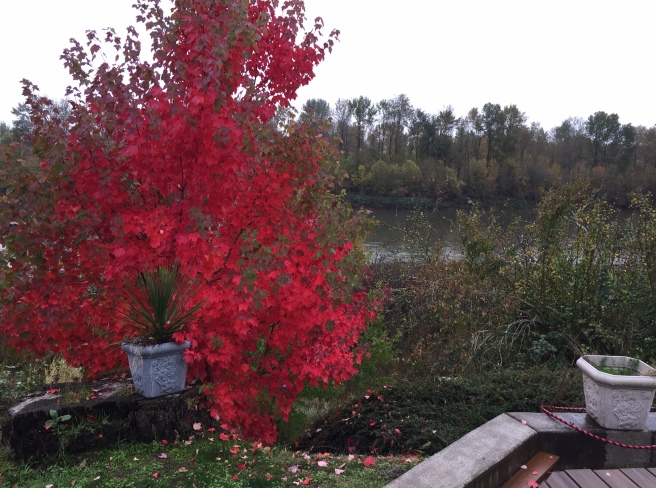 We want to wish every one of you “Happy Thanksgiving!”

It’s been a year of changes for our family, as I’m sure it has been for many of you.  We are feeling more and more settled in our new home, and our new jobs.  I’m sure that as each month passes, we will relax more and more as we get comfortable  with all of the changes.

Every weekend, we try to unpack a few more bins and boxes.  Right now, all of the extra is stacked in the shop, but we are making progress.  Rob’s got his Ebay shop all set up, and is very thankful to be able to stop working out of bins and boxes.  He has a new job as an instructional aide in the public school system, working with special needs children.  I am working as a personal support worker for my autistic niece and my special needs nephew.  Our house is much smaller than the old one, but is adequate for our needs.  We live in town now, but have 1/3 of an acre with a shop and a garden area.  We were able to get the camper moved down here last weekend, and it has a concrete pad where it will park.

We are looking forward to going camping soon.   As I had hoped, living in the camper all summer did not ruin our desire to continue camping often.  We are eager to go!  Maybe even at Christmas time.  If so, we’d better make some reservations soon!  Until then, we will keep moving forward in our lives and continue getting settled here in our new home.  We have much to be thankful for on this Thanksgiving Day.

We had a lovely day today.  We celebrated here at our new house, with lots of family and tons of food.  Tomorrow, we will continue the fun by going on a ride on a historic holiday train.  It will be fun to spread the fun with our family out even longer.  I hope your Thanksgiving was wonderful, too. 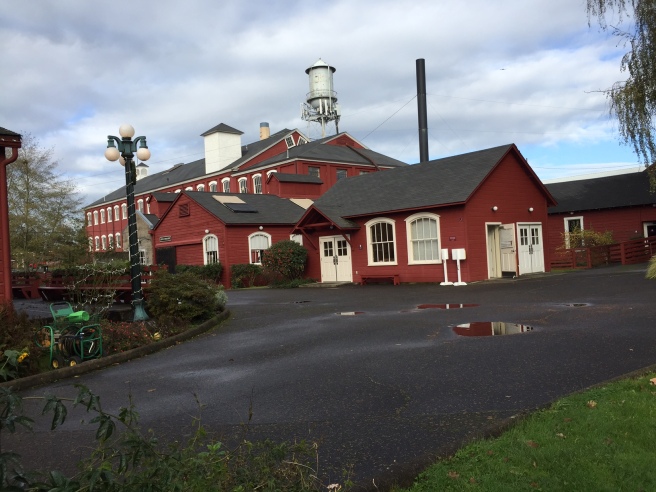 On Monday, we visited Mission Mill Museum, in Salem, Oregon.  I had never been there before, and had a wonderful time.  Once we paid the admission cost, we were shown a short movie giving some history of the buildings that were on the grounds.

This was a woolen mill that was open and made wool cloth for many years, but closed in the 1960’s.  As we toured the facility, we saw the machines, and most of them still worked.  It was very interesting to see the mill race as well.  Apparently, back in the day, the mill owners built a “ditch” that brought water for miles (yes miles!) to make the stream large enough to make electricity and power the mill.  It is still generating power, and they sell it back to PGE, the local power company.  Amazing!

There were also 4 other buildings that had been moved to this site from a near-by mission, and the story of the mission was documented in the houses.  It was very interesting to read about the early settlers of Oregon, who came to preach and teach, and actually ended up contributing greatly to the formation of early Oregon in many ways.  They had some interactive exhibits that the kids enjoyed playing with in one of the houses.

My nephew, Jake, and daughter, Patsy, enjoyed playing with a crimping iron, and some toy food. They also learned about early schoolrooms, and other things.

My niece, Alissa, and daughter, Ja’Ana, enjoyed the tour of the mill, and were in a goofy mood part of the time, as teenagers often are.  It’s nice to see them having fun together.

My aunt and I enjoyed taking the 4 kids around and the beautiful break in the weather that we got–lovely sunshine between the rain showers that obviously had just visited before we did.  The kids browsed through the gift shops on their way out, and we ate a picnic in the parking lot before we went home.  It was really fun and informative.

It’s so funny what kids remember.  When asked what he learned, Jake didn’t mention the food, cooking with play food, or building with the blocks.  Instead, he remembered an obscure fact that the museum guide told us about as he showed us a large map of Salem, Oregon, long ago.  Salem is the capitol of the state of Oregon.  He informed us of where the capitol was long ago, and that it had burned down a time of too, in the past.  So, that’s what Jake remembered.  There had been a fire.  So, when asked, he informed everyone that he had been to a place that burned down.  Silly kid.  But, we sure had fun!  It was a great morning, and a good way to keep them busy on a day with no school. 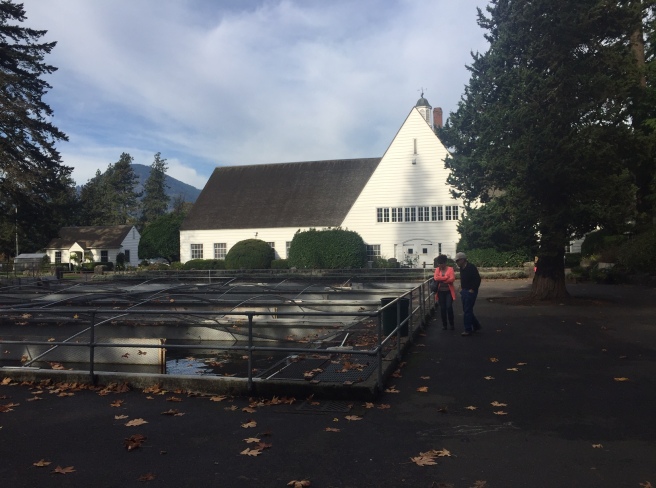 Yesterday, we took 2 of our children, plus 2 cousins on an outing.  We chose to drive up the Columbia River Gorge, and ended up at the Bonneville Dam Fish Hatchery.

First, we stopped at Crown Point where we almost got blown away, it was so windy!  In fact, only 1 child chose to even get out of the car.  That would be our brave niece, Alissa.  The view, however, was magnificent and was worth seeing.

Then, we stopped at Multnomah Falls.  Part of us hiked up to the first little bridge, some stayed below, but everyone had a great time.

Lovana was one of the brave hikers.  Our destination is that little bridge you can see in the background. 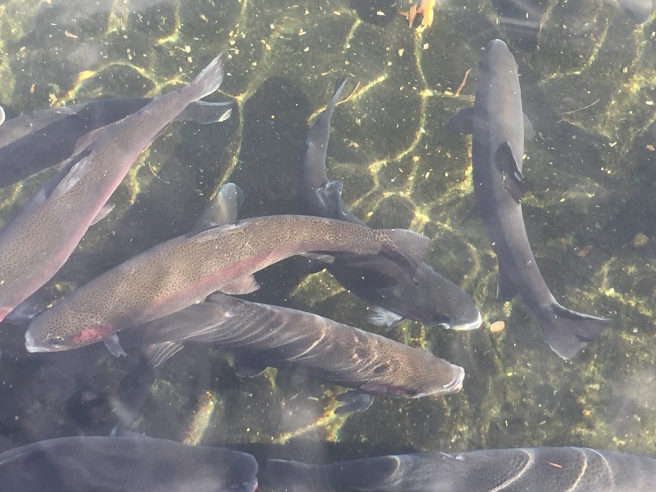 At the fish hatchery, there were many large rainbow trout in various ponds and holding tanks.  These were oversized trout who were older than they would have been in the wild, for display.  There were also huge sturgeon fish in another tank, and many pleasant walkways to stroll around on the grounds.

You could get fish food with quarters, and everyone had fun feeding them.

Jake liked flicking the food into the water–each to his own!

We then went over to Bonneville Dam itself and went through the visitor’s center.  We were hoping to see salmon in the viewing windows, but there were none.  Still, it was fun to drive over a dam and look around.

The day was ended with a trip for ice cream at Cascade Locks, and a long drive home.  Everyone had a great time, and hopefully, it won’t be too long until we venture that way again.